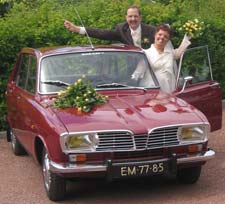 Bon Jour.
Problem du France, go in Englisch.
On 26 Mai 2004 had I a wedding from my brother Dick Meijer and Corrie Vreugdenhil.
The place in holland was Urk ( near Emmeloord ) 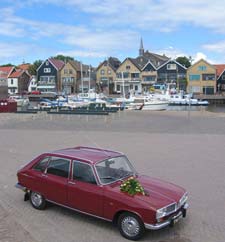 My Brother had ask me to drive him and his wife around on his wedding in my beautiful Renault 16 from 1965. Some off you know him from some r 16 meating when I take him with me.

So it was a great day and the car looks nice and shiny in the sun.

I had No problems with the car and the yough lovers.
I am so happy that the make the chose to take my car as one wedding car.